I would have to say my thoughts on how this class was going to go was different from how the class actually went. It was an interesting experience overall though.

I would have liked to learn more about the processes UX designers take(and compare that to what we learn in our HCI courses). One big thing that I wish I could’ve gotten from this class would be learning about what applications other students used for efficient prototyping and presentation design. A class like this is really cool and allows different majors to work together so they can better understand each other and better prepare for working in industry. That being said, if the different majors only work on things they already know, it doesn’t really help anyone learn. Overall, I think this class was valuable in different ways and I would definitely take it again if I had to redo this semester.

When it comes to the final project, I think getting more time to work on it (if the class stays one day a week) would go a long way. In addition, having hard deadlines, that were announced in advanced, throughout the class might have been more helpful. I wish knowledge could have been better shared throughout my project group but I’m happy with our end product. I think working with different types of people can be very beneficial for our futures.

Artificial Intelligence as a New Design Material
The point made in this article regarding the unknown or unpredictability of AI reminds me of Microsoft’s Twitterbot Tay.  In less than a day the tweets or “data” Tay was receiving from other Twitter users left it racist and sexist. It’s amazing how quickly AI can learn to become its own thing so quickly.  I think it would be interesting for designers to have to decide what they would say for different AI when explaining to users the basic capabilities that specific AI product might have. Will they warm against possibilities like what happened with Tay? For which products would that be necessary?

UX Design Innovation: Challenges for Working with Machine Learning as a Design Material
I think the unrealistic expectations people have of products made with intelligent technology is a very serious problem, especially as more and more things are made to be intelligent.  Some things that have increased intelligence, like smart watches for example, are less of an issue but when someone expects their autonomous vehicle to be as alert and capable as a human is where problems arise. Tesla has warnings in place in their vehicles reminding drivers to stay alert but there are still people who nap or watch movies or more while in the car. Technology or machines are not perfect and autonomous vehicles are no different. People who create or design these new features or products take on so much responsibility making sure users are aware of the limitations but users still have unrealistic expectations.

Machines Learning Culture
This article mentioned different ways people are used ML for art like creations. I find this interesting becuase at first thought I never think about how ML or AI could be used for art.  I have heard of the augmented hand before but I never looked at how there’s an art aspect to it. I only thought about how it was an interesting example of augmentation.

Wrist wallet with pockets for organization with a uniquely integrated metal hoop built directly into the wallet to attach a wrist strap, keys, or more.

Jane is a 22 year old college student. She takes the bus to class and needs her ID to be easily available. She doesn’t like bulky wallets or phone case wallets of any kind. Jane only carries a few cards, some cash, and a couple keys to keep the bulk down. She isn’t a fan of key chains and likes to keep keys inside her wallet. Jane likes having her wallet on her but wants to leave her hands open. She worries about losing her belongings so she likes things with zippers.

“My only concern is the security of the key ring.”

The metal hoop (key ring) will be thicker. It will also have a strong clasp to make sure it can securely hold a wrist strap or keys.

The Engineering of Experience

I think Pheobe Sengers has an interesting take on fun and procedures in the work place and at home.  I can agree with the point that she made regarding work place stress injuries and Taylorism’s affect on the assembly line.  That being said, I believe there are certain areas in which strict procedures are beneficial and should be followed.  When a programmer writes code, they make it a point to keep in mine optimization because that can have a big effect on the end product﹣whether that be from having inefficient runtime or from having to rewrite code.  This is important because at the end of the day, there’s a job that needs to be done and a “client” whose needs need to be met.  Taking time to add “fun” to the process disregards that fact and ignores that some programmers actually enjoy the challenge that comes with creating and pushing optimized code.

I agree with Bakhtin that if something doesn’t fit in with us or our lives then we are more likely to loose interest.  I think that does a very good job explaining why someone might have a given experience with something.  I also think this notion can be helpful when shaping or creating a product. If a product is for a given customer then using aspects of such a customer’s life when designing the product may in turn make a positive experience more likely.  I also found the breakdown of experience into threads to be very interesting.  While this could make it easier to understand how an experience could come about, I would worry that it could leave out aspects of how or why one might experiences something.

For our prototypes we wanted to focus on wallets that would be easy to carry around. We made this decision based on our interviews.  We found that our interviewees were more likely or often use smaller wallets or phone wallets due to size or being able to easily hold them.

For this model we wanted to focus on keeping a compact wallet in which the user could store roughly three to four cards as well as a key.  It is common for some college students to only need their apartment key on them and a few cards so in this situation a minimal phone case is optimal.  Similar to the stick-on card holders, this case keeps in the key and cards with tension from the case so the user doesn’t have to worry about their possessions falling out.

This model represents the back of a full phone case with a wallet the can be shut.  There is an opening to allow for camera use while using the case (wallet opened or closed).  The wallet has space for up to two keys or a key and a fob.  There is one case slot that can hold up to four cards.  This model would allow for cards and keys to be securely held in place the via the closure aspect of the wallet.  This model’s closure aspect also allows the phone to keeps its flat back feature. 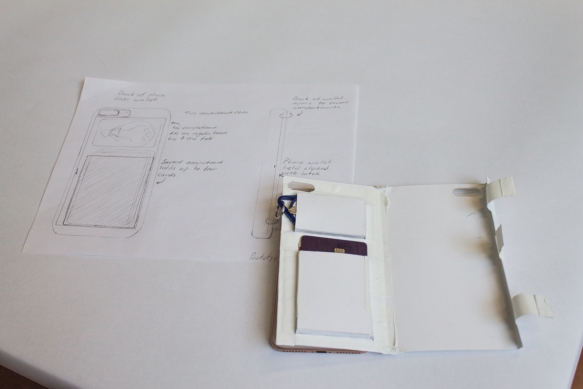 Designed after the tight pragmatic design of a clutch, this wallet has a flap that keeps a slot for serval keys as well as a slot for cards.  There is enough space to hold one or two keys for the user as well as roughly four cards and enough room for an ID pouch on the top flap if desired.  Due to its small design it could be outfitted with belt loop on the back of the wallet so it could be held on by a belt. 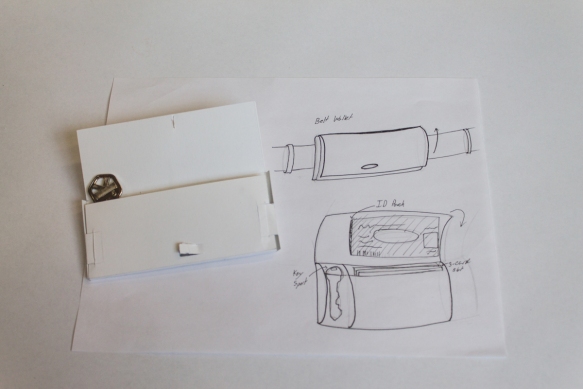 This model is an updated version of a simple wrist wallet.  There is more space in this wallet to carry more items on the wrist.  With three pockets, the wallet can hold up to six or seven cards.  Cash and up to three keys (or fobs) can also be held in this wallet.  The separate pockets allow for easy organization.  There is a transparent slot on the side of the wallet that will fit another card or ID.  The outer pocket has a middle cut out that will allow for easy removal of the card.  This wallet will be closed by a zipper and held on the wrist by a detachable wrist strap attach to an outer key ring. 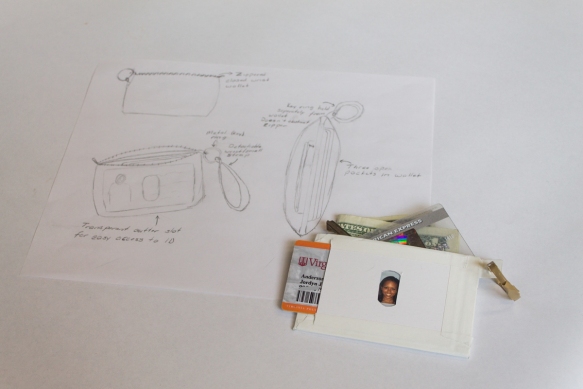